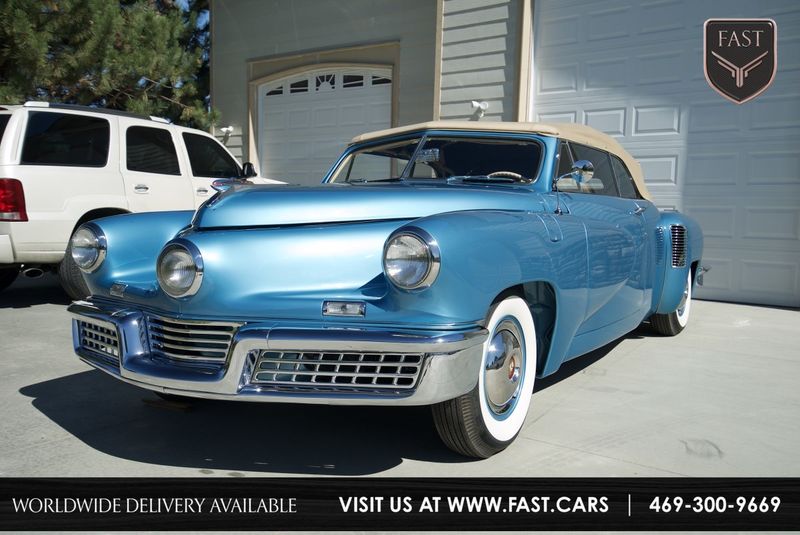 This vehicle is not on display to the public. An appointment is required to view it.

Preston Tucker, the man behind the Tucker automobile, was a charismatic rebel who was possessed by his creativity and determined to do what many said couldn’t be done. His cup of creativity bubbled with activity. As his career unfolded, it became clear his destiny was to shake off his contemporaries and to do what had never been done before. He was David looking for his Goliath. He was fearless and more than a bit of a gambler. Ready to risk his fame and fortune, he jumped headfirst into an inevitable collision with the establishment. He was determined to capture his dream and build a car that he believed America deserved – a safer, sportier and entirely unconventional sedan with baked-in engineering that his competitors could not match.

Early in his career he and a partner worked to help Henry Ford with race car engineering and design. Tucker was the inventor of the Tucker Turret, a powered gun turret that was mounted to military vehicles in the Second World War. It played a key role in the success of the allied armies.

Tucker is most remembered for his attempt to challenge the big three American auto manufacturers by starting his own, ultra-innovative car company, the Tucker Corporation. Tucker’s goal was to apply his unconventional wisdom and common sense to build a car that excelled in areas such as styling, safety, performance, value, and engineering. If Tucker succeeded it would have taken the “Big Three” several years and hundreds of millions of dollars to retrofit their cars in an attempt to compete. And as they did so they would have been relegated to the side of the road as they watched a Tucker drift by, eroding their domination of the American car industry. Tucker accomplished what he set out to do with what he called the Tucker 48.

The Tucker 48 sedan was unlike any other car in the world when it was introduced. Some of its most unique features were a “Safety Windshield”, centered swiveling third headlight, quick-swap powertrain setup, and rear-mounted “flat-six” aircraft engine that was updated with water jackets for proper cooling. The Safety Windshield was anti-shard laminated and was designed to be easily removed in the case of an accident. The centered swiveling third headlight was synchronized to the movement of the steering wheel to help the driver see around bends in the road. Even today, synchronized headlights don’t appear in any but the most expensive cars and their appearance is a relatively recent addition to what is supposed to be “state of the art” automobiles.

The quick swap powertrain (engine and transmission) setup was designed to be easily be swapped within fifteen minutes of arriving at a Tucker service department. This system was developed so that customers could drop off the powertrain at the dealership and leave quickly with a “loaner powertrain.” This would allow an owner to avoid waiting, sometimes for days, as their car was repaired, an inconvenience common among conventional cars. Imagine the advantage of such an option if you were on a long-distance trip with a car full of kids.

The Tucker 48’s rear-mounted Franklin aircraft engine could go from zero to sixty in just seven seconds! This kind of performance eclipses that of many of today’s full-size luxury sedans. Because of the “flat-six” design, which means that the engine has six horizontally opposed cylinders, the car had a much lower center of gravity. This allowed it to navigate corners and winding roads as if it were a European sports car.

Today, Tuckers have captured the imagination of car collectors everywhere as they speculate about what might have been. Could the “Big Three” have ever caught up? As the Tucker 48s were rolling off the assembly line Preston was already busy devising changes and improvements that would be built into future production runs.

The first Tucker ever produced was a prototype sedan, known as the “Tin Goose”. Fifty-eight frames and bodies were built at the factory. From these parts, 36 sedans were finished before the factory was closed. In addition, one prototype convertible known as “Vera” was started but not finished at the factory. Since the factory closed, an additional 15 sedans have been completed for a total of 51. The convertible was completed in early 2010, pushing the total to 52. The majority of these vehicles are in excellent condition. When the cars appear at auction, which is rare, they command prices attained by only a few marquee cars. A Tucker sedan sold earlier this year at RM’s auction for just under $2,000,000 with buyer’s premium.

Little is known about what projects were being worked on in the Tucker Corporation experimental department when the Tucker plant was forced to close. However, it’s known that chassis number 57, the prototype for a future model, was underway. A Tucker Corporation design engineer was once interviewed about the prototype years after the plant closed. One of the questions that he was asked was “Was there a Tucker convertible project ever started at the Tucker plant?” He responded, “Yes, but I thought that the project had been scrapped when the plant closed.” It should be noted that he was working on Tucker number 57 when the plant closed.

The Tucker convertible started life as a Tucker 48 sedan in the Tucker factory and is stamped 57 in multiple places. When Mr. Tucker gave the orders to start work on the top-secret two-door convertible project both Tucker and third-party engineers from Lenki Engineering went to work. It should be known that Lenki is the firm that Mr. Tucker employed to build the aforementioned “Tin Goose”. Tucker and Lenki engineers started on the convertible by cutting sedan #57’s roof off. Once this was done they noticed that the frame was sagging. Knowing that the standard Tucker sedan frame was not strong enough to support a convertible and to ensure that valuable torque wasn’t lost in the frame the engineers completely disassembled the car and devised a plan to strengthen the convertible’s chassis.

The engineers decided that adding ovular steel beams inside of the boxed Tucker frame as well as thickening the existing frame would probably take care of the problems that they were facing. The end result was a stronger ovular steel frame box wrapped in thicker than stock 10 gauge steel. The engineers’ predictions were correct; the modifications strengthened the convertible frame enough to eliminate the unwanted sag.

After the problems with the frame were resolved Tucker and Lenki employees went to work on lengthening the doors and installing a shortened windshield frame. They also modified a late 1940s General Motors convertible top frame by adding a Tucker designed header. This is as far as the Tucker and Lenki engineers got with the car before the Tucker Corporation went out of business.

Information given in interviews of Robert McLelland, Head of the Tucker Experimental Assembly and Test Department, and JoeLenkiof Lenki Engineering after the Tucker plant closed state that the convertible project was taken to Lenki Engineering headquarters soon after news of a potential Tucker bankruptcy broke. There the car sat untouched and under a cover for many years. A retiring Lenki Engineering employee was allowed to purchase the unfinished project just before he left the firm. The employee had plans to finish it but never did. He sold it to another individual who also planned on finishing it, but didn’t. According to Al Prueitt (more on him below), Nick Jenin, a Tucker early Tucker collector, owned the car at one point. The project was eventually acquired by and finished at Benchmark Classics in Madison, WI.

If you are into cars this is probably not the first time you have heard about the Tucker Convertible. It was on display at Keels and Wheels Concours D’ Elegance (Houston, TX), Auto Historica (Chicago, IL), the Fairfield County Concours D’ Elegance (Newport, CT), Rodeo Drive Concours D’ Elegance (Beverly Hills, CA) and the largest car show in the world, the Antique Automobile Club of America’s Hershey, PA Meet. It was also featured in the New York Times, The Sacramento Bee, The Wisconsin State Journal, numerous other newspapers, Old Cars Weekly, video segments, and countless blogs. Interestingly, none of the articles have addressed one of the car’s most significant traits.

This is that it is most likely going to be the last Tucker automobile to ever be completed using body parts sourced primarily from Tucker. This is more important than it may seem due to what was previously mentioned about when other Tucker automobiles have been finished. To reiterate, of the 52 Tuckers that have been completed to date, 16 have been finished since the factory closed and this is due to the fact that the Tucker Corporation went out of business before they could finish all of the cars they produced parts for. Sales history of Tuckers doesn’t suggest that completion dates have an impact on their value. However, anyone who is into collecting knows that the first and last units of any series of collectible items are worth far more than other units within the same series. Again, it is also most likely going to be the LAST Tucker to be finished using original body panels. And last but certainly not least, it is the ONLY Tucker Convertible in existence.

Some people believe that car #57 was actually supposed to be a prototype for the 1949 sedan which was going to have wraparound rear glass. It was a prototype for a future model and there are pictures of a car on the Tucker assembly line that had been altered for wraparound rear glass. However, there’s no evidence to support the claim that it was chassis number 1057. The late Al Prueitt, Founder Of Prueitt and Sons Restorations, authenticated the car as being an authentic Tucker Corporation concept. Mr. Prueitt was heavily involved in the classic car industry for over fifty years and founded his company, Al Prueitt and Sons, over thirty years ago. They’re well known for their top-notch work, integrity, and dependability, with over 100 national awards from such clubs as the AACA, CCCA, and the RROC. Al is also one of a select few who have received a lifetime achievement award from the CCCA.

Al Prueitt: “In 1966, I saw the rolling chassis and many sheet metal parts for the Tucker Convertible, along with other Tucker 48 Sedans. I also saw that the convertible was stamped #57 and its frame was reinforced at that time…I have seen and inspected the Tucker Convertible and have verified its authenticity.” The car’s documentation can be seen on its website (www.tuckerconvertible.com).

The Convertible sold privately in 2010 to a collector who loves it for what it is:

Don’t miss out on this ultra-rare opportunity to own the most beautiful and desirable Tucker on the planet!